I Was Born to Distract 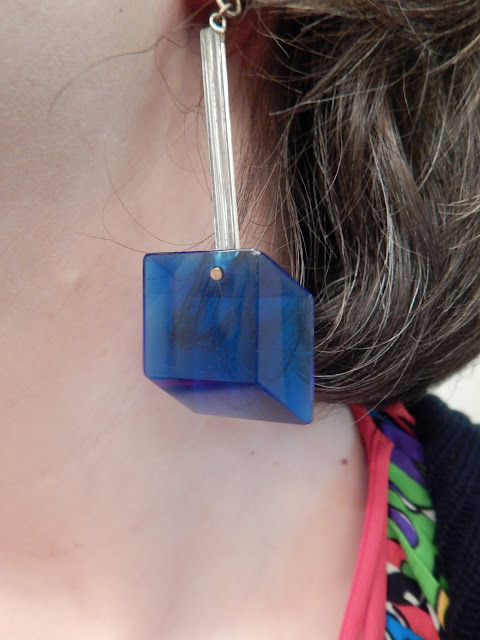 I was once asked to remove these earrings during class as the teacher thought they were too, "Distracting." 1980 was such an innocent time, before teachers knew what distractions were yet to come. Looking at them today, it is hard to see what would have been so terribly interesting that it would keep students from their work. 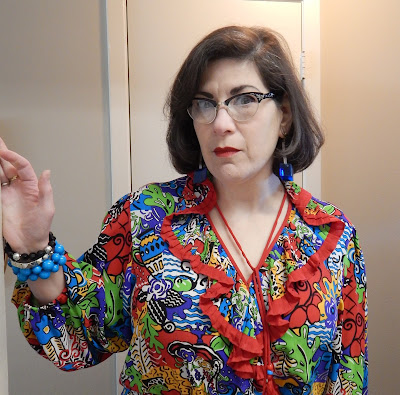 You want distracting? I've got distracting right here in this Diane Freis dress from the 1980's. With all the ruffles and wild colours I've come to think of this as the, "Carnival Dress", and so it was only fitting I wear it this weekend. 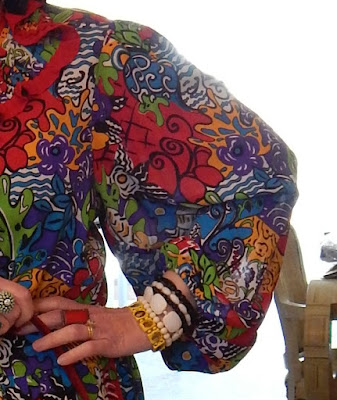 Did someone say, "Huge sleeves?" Well, here ya go. 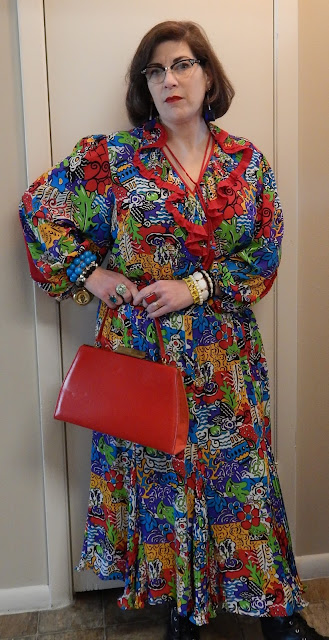 I wouldn't have worn anything like this in the 80's, but through some fluke I now own two very loud, Diane Freis dresses. My mother had several in this style, but she was tall which helps with a dropped waist...I mean, on the dress. My waist dropped years ago along with my boobs.

These dresses sell for crazy amounts of money at 1st Dibs, and other designer spots for vintage around the net. I found both of mine at Goodwill. As far as I can tell (where I live anyway) there are still plenty of them out there in the thrifts for considerably less than $595.00! I think I paid about five dollars. They're easy to spot by the wild designs, but also by the elasticised drop-waist design. They're worth keeping an eye out for. The design of these dresses makes them comfortable to wear, and forgiving if you put on a few pounds.

Whenever I wear this dress I find myself wishing I owned a bottle of Poison, but looking through my perfume collection I settled on Fragile. It felt like a good fit, though it isn't quite as forceful as an outfit like this seems to demand. Next time, I'm doing Knowing. 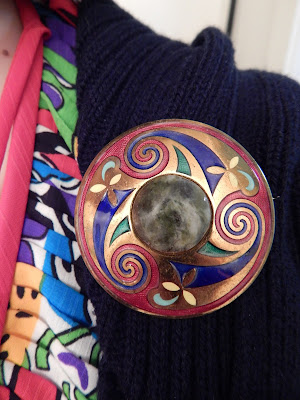 Outfit Particulars:
Diane Freis dress (80's) Goodwill
Sweater coat-Dots, about 15 years ago
Brooch-Antique store somewhere in Massachusetts
Early 80's earrings-I Think they came from The Limited, but I could be wrong. After three decades it all gets a bit murky.
Bracelets-I believe all of them came from K Mart at various times.
Boots-K Mart
Tights-Walgreen's
Vintage Johansen handbag-Hand-Me-Ups
Fragrance-Jean Paul Gaultier  Fragile 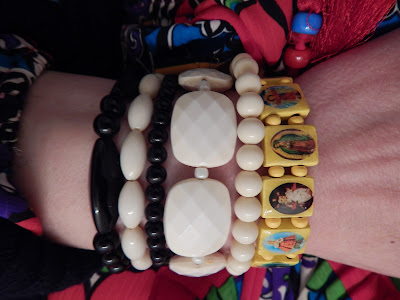 I rarely wear stretch bracelets as they tend to cut off my circulation, but these are comfortable. The large blue ones need to be worn higher up because when they sit at my wrist they are heavy enough to bang at my wrist bones. The joys of RA! I've found that juggling the bangles/bracelets/rings around typically comes up with a way I can wear them comfortably. It might change day to day, but eventually I figure it out. Sometimes I can wear things later in the day that wouldn't go over my hand early in the morning. I won't even talk about shoes. It hurts to be fabulous! 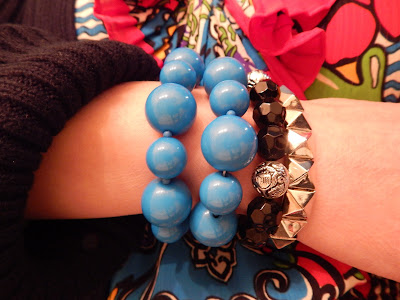 I found a store in Omaha that stocks my favourite mints in the whole entire world. Naturally, I bought two dozen packets. Violets are one of my favourite edible flowers, and the mints smell so incredible it is worth keeping a packet in your purse just for the sachet quality. The lemon mints are excellent as well. Now that I know I could just order online, I never need be without them again...I have very low requirements for my happiness. 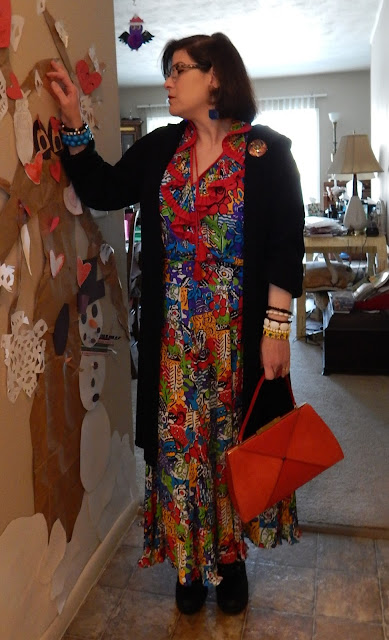 We have a busy week ahead, but I've put aside some time on Tuesday for pancake making. When Danny was little, we'd make crepes, and I'd let him have the first one or two imperfect ones. He'd cover them with the sorts of things a small child would-brown sugar, jam, chocolate chips, all of that at once, and so on. Over the years, my crepe making has improved to where I rarely mess them up, but Danny still gets the first two, perfect or otherwise. He's lucky he's an only child or he might need to fight for them! Typically, I make them early in the day and then use them for a caramelised apple pile of crepes that goes under the broiler for a minute before serving. It is a nice, once a year sort of dessert, but I've also layered them with apricot jam and melted dark chocolate.

My mother was not a pancake maker. At all. We'd have them if we went out, but that was it. In the American Midwest, pancakes tend to be a thick, fluffy, cake-like thing made with buttermilk. You can get buckwheat pancakes, or Swedish pancakes which tend to be thinner, but in most places if you order a "pancake" you're getting the sweet, fluffy things. 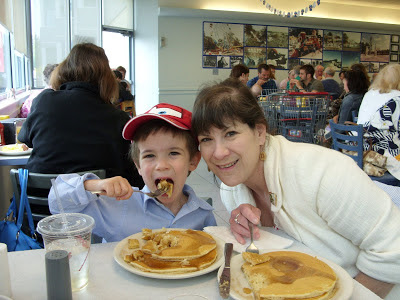 Here's an old photo from a Mother's Day breakfast (Before Danny developed food allergies. This was one of his last meals eaten away from home) that can give you an idea of what, "Pancakes" means in Nebraska. They're served with whipped butter and warmed maple syrup. I think Danny was about four here. I remember they had face-painting and the woman wanted to do a funnel cloud design on him and he was laughing that we'd already had a, "Real tornado." I obviously couldn't be bothered to wear makeup, but I did drag my behind out of bed for a drive to the city for pancakes. And what pancakes they were!How many calories do you suppose a plate of carbs like that packs? 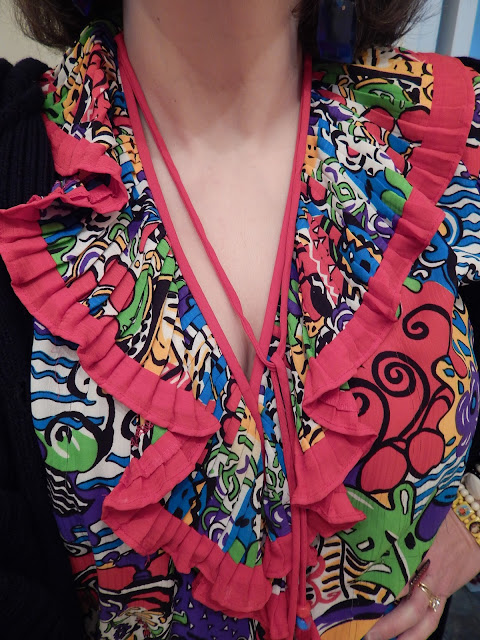 As it is traditional to get drunk and flash your tits at carnival/mardi gras, I hope this will do.

Pancake Day-fluffy or thin? Maple syrup or lemon and icing sugar? Or do you just go for a King Cake instead? I have also been drafted to make apple fritters this year.

If you're looking for my archive of lenten cakes, click on the Pages link in the sidebar.

Good Lord, that Donna Freis dress looks like Roy Lichtenstein, Frida Kahlo, & Henri Matisse had an artistic threesome and designed a dress for Carmen Miranda. You've accessorized it perfectly though, as you always do..
Parathas are about as close to pancakes as we get around here.
On the subject of hot rollers- I spoke with a Texan hairdresser friend of mine who does hair for pageants & rodeo queens, she says Babyliss Pro BABNTCHV21 Nano Titanium Professional 20 Roller Hairsetter is the beauty contestant's weapon of choice. They're a little spendy but my friend says they last a lifetime, they're so simple to use so even blondes can't screw them up, and the set they give is long lasting & gorgeous. They're available on Amazon for a little under $70.
On Vidal Sassoon haircuts- It takes an hour & $150 for my VS trained hairdresser to cut my baby fine pale blonde hair into an Anna Wintour perfect graduated bob. Fine, blonde hair is the most difficult to cut as any mistake shows & a graduated bob is technically the most difficult to do. That haircut lasts me 6 months, so I think it's worth it.

What a fabulous dress. And those earrings!! I love that you've had them since the 80's. You're a regular juvenile delinquent! Look at sweet little baby Danny. You look very pretty au natural. Pancakes are a very big deal in my house. We even named our dog Pancake. My husband is a total pancake snob. He separates the whites from the yolk. Whips the whites. He must have fresh organic buttermilk and only real Vermont maple syrup. None of that Mrs. Butterworth crap. I like mine thin, well done and preferably sour dough. Yum.

Fabulous frock - it is indeed a carnival in fabric.

I usually make the thin ones as they're traditional here, served with sugar and lemon. Though they're also nice wrapped round a savoury filling like chili or bolognese. I don't do the fat ones, which I always think of as 'American style', very often, but if I do, they have to be served with sweet things like syrup or fruit compote.

I'm half-tempted to make savoury Vietnamese pancakes this year, made with a coconut and chickpea flour batter, and filled with prawns and beansprouts...

@Bibi
Excellent. I'll make a note of the rollers and look for them-eventually my hair will grow back and I'll want rollers again. Thank you.

@Connie
Your pup Pancake is the very best pancake of all-what a sweetie. I have three sourdough starters I use for bread...I don't know why I don't use them for pancakes. Thank you for the suggestion.

@Mim
Chickpea pancakes sound delicious. I had a friend that was fond of eating pancakes with savoury things like stew (he was South African). I guess injera is a pancake too, now that I think of it.

@Vix
It probably saved your ear-lobes being all misshapen from the weight of those earrings-mine are seriously strange looking now.


What an amazing dress - like a box of oil paints had melted and then taken speed! The earrings are perfect with it and are wonderful earrings in themselves. Love the brooch and bangles, too.

I have the same problem with bangles. I can't wear ones I've had for years because I think my knuckles have got larger. I have arthritis in my hands; its not causing me any problems at the moment but I think its responsible for the bangles not fitting me any more. I had to give them away and go buy new ones....I also find it difficult to wear elasticated bracelets; they either pinch me or make me itch!

We grew up with thick pancakes or at least that's how my Irish parents made them. We put sugar and lemon juice on (Jif!) from a plastic shaped lemon. Since I've made my own, I tend to make mine thin but I do like the thick ones, too.

Danny looks so sweet and gosh you look so young - how old were you - 16?

Never mind the details about the pancakes, so long as the butter is soft and the maple syrup is genuine, let me get on with the custom.

Your new 'do is well cut for the display of earrings with action, and those blue bits of light definitely swing! The pin is equal to the dress -- and that's saying *wow*! Elasticated bracelets are girdles for the wrists. (I burned my girdles when others burned their bras.) Wore the blasted things back when I did radio and noisy jewelry was verboten. Now I'd rather wear bangles and ching/clink in the library.

@Veronica
I was eight years younger than I am now;)

(I was already kind of elderly when Danny was born).

@Beth
I worked in the foundations department at Filene's in Boston many, many years ago. This was before Spanx, and I spent most of my time trying to convince already very thin women that they didn't require girdles. It was the most depressing job I've ever held. I was part fashion consultant and part therapist. It was worse than bartending-people would tell me everything whether I wanted to know or not.

So good on you getting rid of those girdles! Unless you're wearing a piece of vintage that requires it, or historic items that need corsetry, there's no good reason to willingly subject yourself to that on a daily basis.