Send Up a Flare 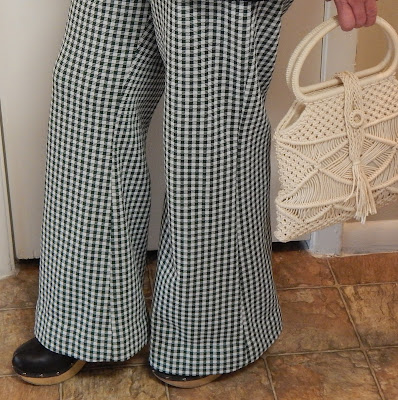 You should keep flares handy, in the event you have a trouser emergency. I suppose if your car was stranded in a snowbank you could wave them from the radio antennae to alert rescuers. It would be hard to miss them. 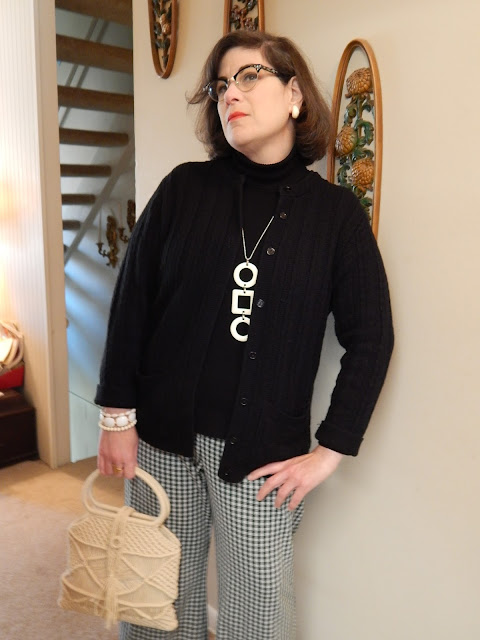 There's a matching, belted jacket but even I know that's just a polyester suit too far.

I know I've said this before, but it is worth repeating-thank goodness for vintage! If I had to wear the ugly clothes on offer at retailers I'd probably collapse in tearful exhaustion getting dressed each day. Nylon tracksuits? Silly cropped trousers that can't decide if they're culottes or knickerbockers? Dresses made out of foam padding? Oh. Hell. No. 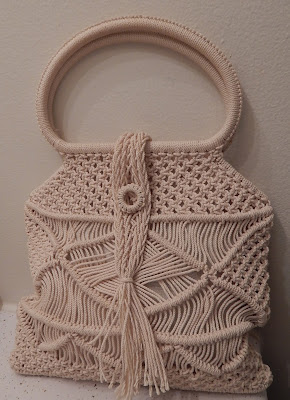 Instead, I get to wear clothes I find interesting, cost little more than pocket change, and are unlikely to fall apart after a single wearing. 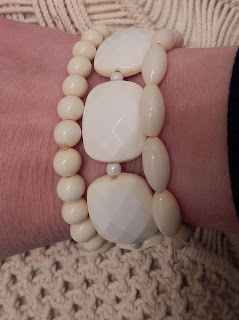 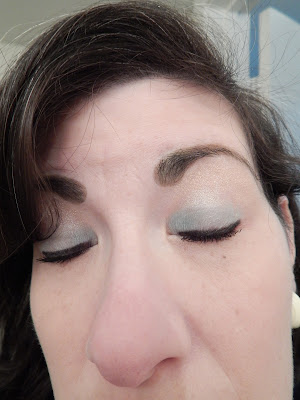 OK, maybe I'll stick to neutrals on the eyes.

Yesterday, Mr. ETB asked, "Is that outfit from Target?"
I thought that was strange because I don't buy anything except makeup there. When pressed to explain why he said, "It looks like the kind of cheap clothes they make in strange colour combinations." Then, (wisely) he hurried out of the house for work. 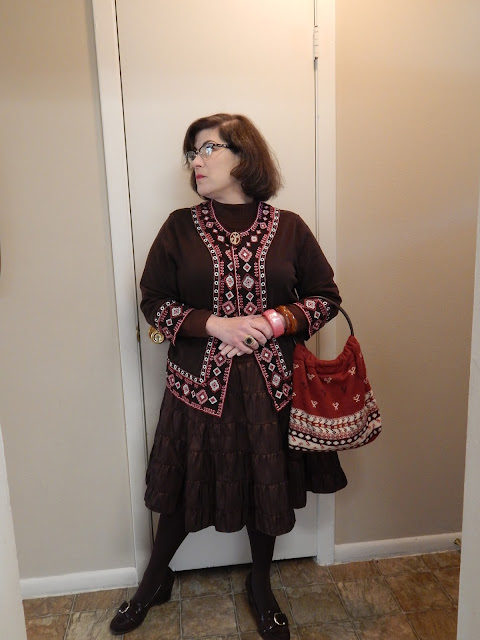 Not from Target. Not even originally.

I was somewhat floored by his comments because these pieces (the skirt, top, and jacket) are all from a high-end retailer (I thrifted them at Goodwill because I don't shop retail). I personally don't give a shit what he thinks about my wardrobe, but I was concerned it might look like I was wearing cheap, fast fashion. Not that I have any problem wearing clothes from K Mart, but they do nicer clothes than Target. 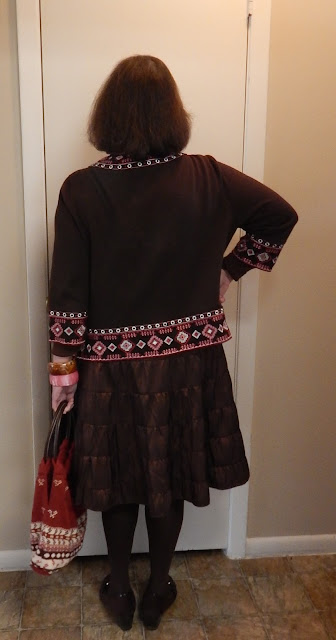 My guess (because he couldn't really articulate what he was trying to say without digging himself in deeper) is that about 12 years ago, Target was doing a LOT of chocolate brown and sky blue clothes in sort of op-art/mod patterns. If he saw a lot of that on women he worked with at the time, it could translate into, "Target clothes." That's my guess anyway. I'm not bothered as I refuse to take fashion advice from a man that dresses like this: 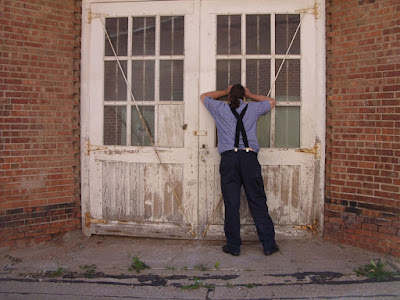 Ponytail, wrinkled shirt, Dickies work trousers, braces. My old man dressed like that (sans long hair) and no one ever sought him out for fashion advice. 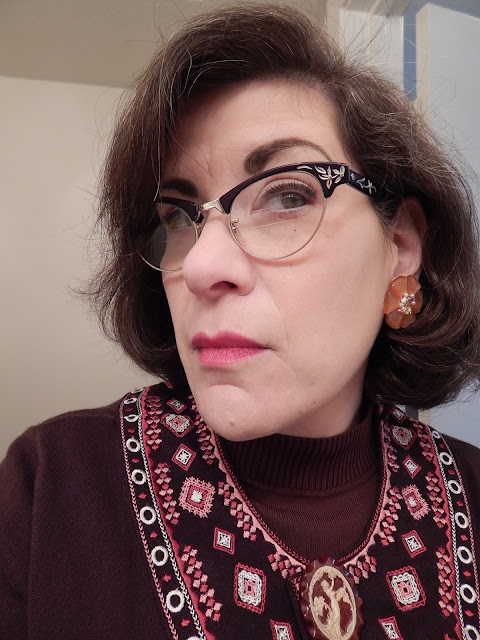 So does this outfit scream, "Target" to you? Go on, you won't hurt my feelings. Have your say.

not at all...clearly, he does not know what he is talking about. not as great as some of your outfits, but you really do look good in brown!

I have a 'sometimes' friend that still favors powder blue, chocolate brown, & op art in her wardrobe and home decor. I think she's maxxed out her Librium, Xanax & Prozac dosages & after 20 yrs of therapy that's gone nowhere she'll become the Cluster B Borderline/Histrionic PD crazy cat lady living in a mobile home park in Petaluma dependent on SSI (not that there's anything wrong with that).

What the heck is going on with Target? When I was in Ft Lauderdale last year my luggage was delayed in Moscow for 4 days so I went to Target to buy some yoga pants, undies, & a hoodie to tide me over until it showed up. A plain heather gray synthetic mix hoodie was $50 and a pair of Champion yoga pants was $45!!! I went to the Old Navy outlet a few blocks away & bought a rayon hoodie for $12 & some %100 cotton terry yoga pants (that fit nicely) for $16. Phooey on Le Tar-jay! ( I did meet the nice gay manager of the cosmetics & skin care dept at Target who gave me a lovely goodie bag of samples though.

What?! Co-ordinating but NOT matchy-matchy detail on well-tailored jacket and nicely shaped bag, plus an anything-but-a-cliche brooch, are not typical Target items. This is, however, the typical blindness to style one expects from an engineer type male who wears his hair in a ponytail, etc., etc. (Burn his toast, I say.)

As evidence of your fashion sense, I cite the restraint in not wearing the jacket with the trousers. Sometimes too much is too much, but the addition of a spectacular necklace is just enough.

Moi, I haven't dared to flare since an unfortunate occurence occured involving flared trousers and the parking brake on a 1969 Ford model-named after a horse.

We have no Target in the UK so I have no idea. I was on the verge of wondering if that was like ASDA, but then I remembered that Wal-Mart own ASDA. At any rate, you certainly don't look like you shop at ASDA. (I do wear the occasional bit of supermarket clothing myself, so that's not snobbery, but your stuff does appear to be rather higher quality.)

Goody - I can't comment on Target as we don't have them here and I, therefore, can't visualise a British equivalent.

Your houndstooth check flares are fab - you have a cardigan with pockets? Brilliant - we need more pockets in our clothes altogether. I love the monochrome look - I've been a bit that way inclined this week as well...

I agree with Vix I think the second outfit is very folksy/ethnic I think it's the print on the jacket. I do like brown and think it's a much under rated colour. You suit brown.

As for men and their style advice - I occasionally ask mine for his opinion on what I'm wearing and he's usually right!!

Have a fab weekend

Whew! I'd definitely take fashion advice from you (and eyebrow grooming, which I am in SERIOUS need of).

Ah, ha, ha, ha. Your blogs make me chuckle, and your clothing makes me happy, and your accessories make me swoon. Hmmm. Your blog is a whole sensory experience, init?

I was chuckling at a previous post where you asked Danny something about whether you looked like trash, and he replied something like "outfit looks like a bin liner". Well, I was on the Burberry fashion website, and GUESS WHAT!! They have an expensive dress that looks like a baggy, garbage bag with fancy gold embroidery!! Hee, hee. Check it out if you get a chance.

@Anon
Thank you, I do like a good brown outfit.

@Connie
I don't tell him what to wear, and he should keep his opinions about my clothes to himself!

@Bibi
Target got expensive even for the basics. Other than makeup, I rarely stop there.

@Beth
I made sure to wear driving shoes (not high heeled clogs) when it was time to drive. That sounds bad...but a learning experience!

@Vix
Kinda like a Primark that sells other stuff like household goods. The clothes are generally junk, but they do special promotions with designers which is where your jumper comes in.

I loved your purple and black outfit-and that coat! Swoon!

@Mim
That's a good assessment actually-though Target promotes itself as being more upscale (it isn't).

@Veronica
We're in this funny season too where all I want is dirt coloured clothing. I dunno, mabe I'm losing my mind ;)

@Thrifty Parka
I just bought a huge pair of vintage eyeglass frames from the 60's so no one can see my eyebrows. I figure I;ll be able to go a month without tweezing!

Ummm, hush your mouth Mr ETB!! I never listen to TOF either, he has zero fashion sense, the amount of times I send him back to get changed when we are going somewhere. The homeless look just doesn't do it for me!!