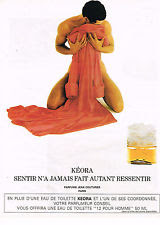 Not that much of an exaggeration.

I was given a decant of vintage Keora over a year ago, but first got around to trying it out this week. I'll be honest-I expected to hate it. I've had a love/hate relationship with Coriandre for years, and I expected Keora to be much the same. I knew it wasn't a green fragrance (people compare it to Shalimar for heaven's sake) but I was still bracing for...something that required bracing. Keora water is similar to rosewater, so really, how bad could it be?

Keora was a lovely surprise. Launched in 1983, it has elements of other floral oriental fragrances of the day-but Keora is not Opium. It is miles better. Keora isn't spicy to my nose (other people smell cardamom and cloves, I don't), but rather rich with amber and non-sweet florals. I smell carnation (though it isn't listed in the notes) and roses, and possibly some lavender. The comparison to Shalimar isn't that much of a stretch, though it lacks the citrus and the vanilla is much different. The musk notes in Keora are absolutely incredible, and that comes from someone that wouldn't go out of the way to buy a musky perfume. This stuff is sex in a bottle. No one (under eighty) would say that of Shalimar. If I ever start a line of perfume I'm calling it, "Sex Powder." What can I say? I like powdery notes.

I shouldn't have waited so long to give Keora a try, but I'm glad I got to it in the winter. I suspect this would be a difficult fragrance to pull off in the hot, humid, Nebraska summer though it might work in a hot dry climate. I have to wonder why it isn't more popular-a perfume like this should be flying off the shelves. Could it be the curse of Coriandre creating a bias for wary perfume shoppers? Intellectually I know it isn't right to judge a house by one fragrance but I can't help it. I'm glad I decided to prove myself wrong, because this is a beautiful perfume.

I'm not sure how well Keora has fared under reformulation, so of course I cannot comment on the current perfume. I'm not sure what the source of the musk note is (floral, synthetic, animal?) but it smells expensive. We've all smelled cheap musk (I'm looking at you Jovan White Musk) and Keora is most definitely not that. This isn't fabric softener.  No one will run from the room when you enter-but they will smell you. Keora is not shy. Keora wants to get laid. The silage is huge, and the longevity is practically forever, at least on clothing. Keora is the Energizer Bunny of perfumery, "Still going...still going..." You'll get your money's worth out of a bottle of Keora. Whether it gets you laid, is up to you, because clearly Keora is doing its part.

What I smell: Rose, rosewood, lavender, carnation, vanilla, maybe some overripe peach,  possibly civet, ambergris, sandalwood, and perhaps some lily of the valley.

Overall, I basically went wild for Keora. This has led to hunting down vintage bottles online, which isn't all that difficult at the moment. Bargains are still to be found, so if this sounds like your sort of thing, this might be an opportune time to stock-up. What a beautiful fragrance from a period when perfumery was getting away from elegant and sensual, to hitting you over the head with everything in the lab. It hardly stood a chance at the time, I suppose but all these years later, I can see Keora appealing to people seeking out a perfume that isn't all fruit and fabric softener.

Woof! "Sex in a bottle", indeed! That ad woke up both of my two remaning hormones.

Hmm. I was expecting to see pandanus listed as a note as "keora" is another name for kewra or the screw pine flower water so commonly used in flavoring Indian sweets and in Mughlai cuisine. I always thought the kewra essence used in Indian sweets was just some type of rose water. Then I bought a bottle of kewra water & the picture of the flower on the label was this odd long pointed white bud thing that was nothing like a rose. I've since seen huge kewra flowers for sale here in the warm lowlands of Nepal, they are quite potent & look like they are from another planet!

While kewrah water essence is quite cheap the essential oil is very costly. The Arabs prefer to mix the expensive essential oil with sandalwood for their beloved "attar kewra." I recall the first time I caught a whiff of an elderly Arab gentleman in traditional Bahraini attire heavily annointed with attar kewra- WHAT IS THAT?!? was my first thought. It started out like a rose to my nose but then went on to this sweet rotting fruit, baby powder, fecal/animalic heaviness layered over creamy, dreamy sandalwood. I was both attracted & repulsed by the scent, it was so unusual to me. Not sure if I'd call it "sexy" but it definitely evokes the romance of some ancient era. I'm sure Cleopatra, Salome, Jezebel, Don Juan, & Delilah have bathed in the stuff.

@Bibi
I suppose most oils by themselves can be a bit much, though it certainly sounds interesting. Whatever they did with this fragrance, it really works for me. Dunno-maybe my nose is changing with age, but I could see going through quite a bit of Keora.