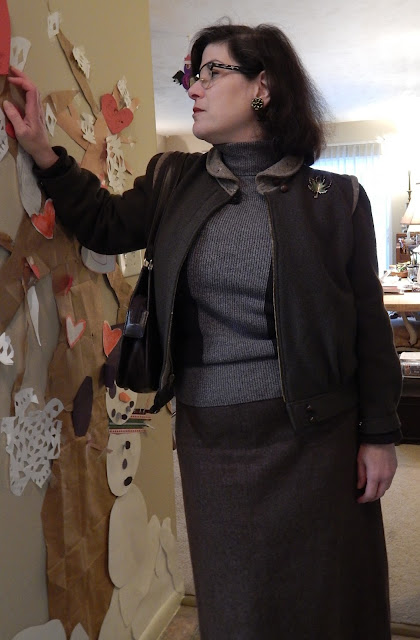 Sigh. There's not much to say about brown clothing. It isn't flashy, no one will stop you in the street and exclaim, "What a cheerful outfit!", and it won't be memorable. At best, you can say, "At least it won't show dirt", which it won't because the colours are one and the same. It figures that brown would be the most flattering colour in my wardrobe. If there's an afterlife, I'm coming back as someone that can wear pastels. 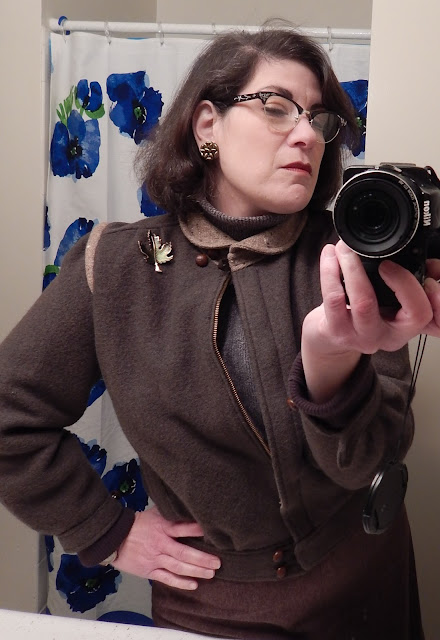 I did perk it up a bit with green earrings and a brooch.

I spotted this jacket at Hand-Me-Ups, and initially balked at $20.00 for a vintage (80's) Geiger jacket. After checking it carefully for holes, flaws, etc. and finding none I convinced myself that it would last forever and be worth the investment. Yes, it was brown but I look good in brown whether I like it or not. The same trip, I found a second Geiger jacket from the 70's in teal, which I should think will be far harder to wear than brown. I bought that one too. At the desk, I found out I'd be getting them on sale, so I was pleased to be spending $16.00 instead of $20.00, but that's still far beyond what I typically spend on jackets. The quality is so incredibly good  that I've convinced myself it was money well-spent...but I'm still uneasy about it. The only way to get my money out of it is to wear it, so I spent no time putting together a very classic, very streamlined, very brown outfit. 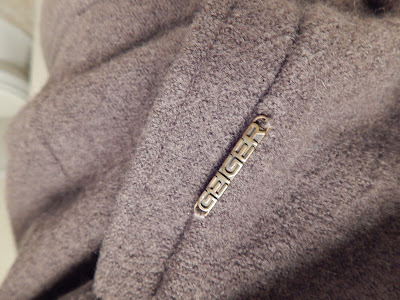 They do make beautiful clothes. 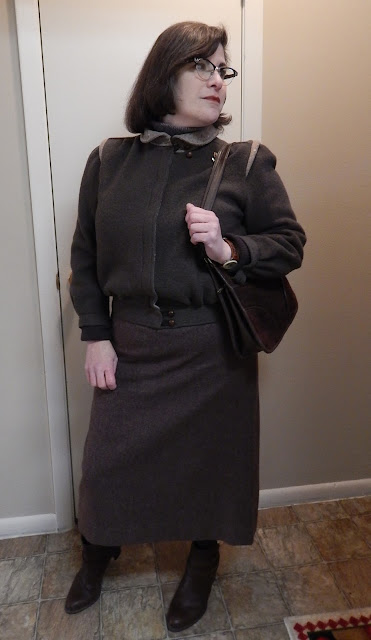 The shoulders on the jacket are just conservative enough to avoid screaming, "1983!" but there is a hint of the Michael Jackson jacket-thing happening. I had one of those (in white leather, with studs) and this is a different animal-particularly with the collar, but there's something in those shoulders, and the contrast tan trim that is only saved from looking horribly dated by the cuffs and waist. If you removed the funky shoulders, this jacket would work as easily for the 40's, as it does for the 80's. With that in mind, I paired it with this long, (I think) late 40's wool skirt by Sporteens. I spent the day at a couple of State Parks (Birding is too a sport) and I was happy to have something warm on my legs (it was blowing a gale today!). 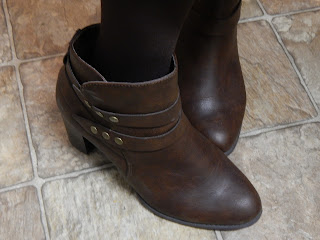 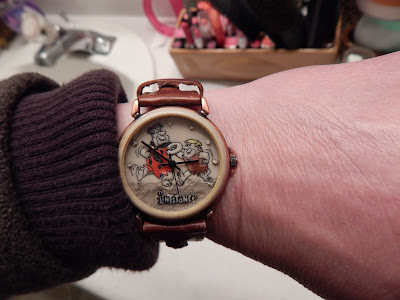 Before you laugh too much at the Flintstones watch, I should mention I own Bullwinkle, and the Jetsons as well. I went through a Fossil watches stage in the early 90's. 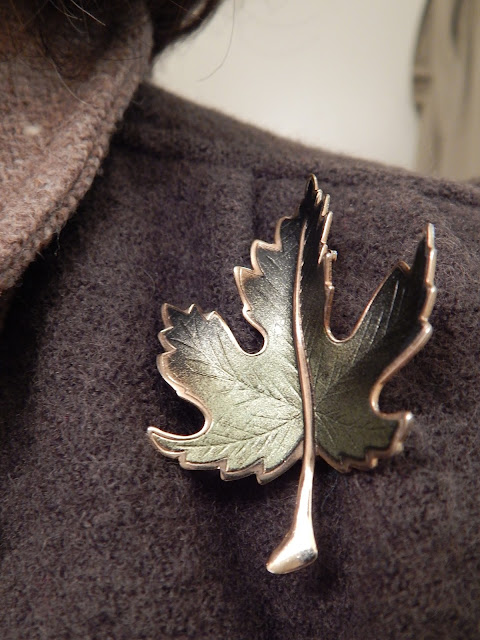 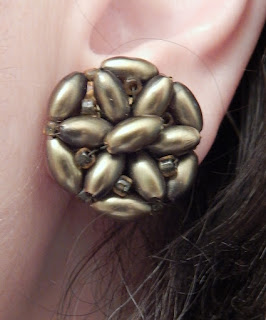 I'm starting to make peace with the fact that brown is apparently my best clothing colour, but it is hard to make the pieces seem distinctive. I suppose that's largely the same with wearing navy or black head-to-toe, but somehow brown just feels like I wasn't really trying. Every wardrobe needs a few items that look "safe" and "normal" but it might be better not to wear them all at once. Looking through my winter wardrobe, there's  a lot of brown.  I'm going to make a point of pulling back on my brown purchases for a bit-particularly wool, but finding such well made vintage clothing does tend to persuade me to purchase. What's a vintage lover to do?! 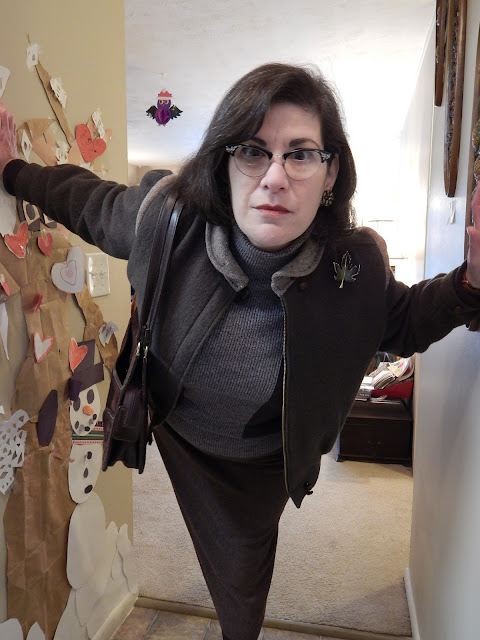 I guess a Zoolander-esque look wouldn't hurt. I call this one, Brown Wool.

I must get out to see Zoolander 2.

There's still two days left to the Great Backyard Bird Count, and Monday is a Federal holiday. Now, what to wear to Heron Haven on Monday? A nice brown cardigan perhaps?

Hope you're having a nice weekend. So far, I haven't been shat on by any birds, so I'm counting my blessings.

LOVE to see the rest of your Fossil watches! You have great taste!!

I love brown! It's like chocolate, how could one not? It's also very flattering on me, even though my complexion is very different from yours. But why not pair it with colour? Brown and blue, brown and purple, brown and red, pink, green, orange, yellow - it looks good with almost anything, no?

Just been catching up on all your posts! Holy moly woman!! A gyrating pole dancing plush toy, colourful clothes, bird flipping, heart shaped treats, oh and then clothes that will not show the dirt!! Brown has its place in your wardrobe, you do wear may different colours and they all in my eyes suit you. Hey I had a mickey mouse watch!!

Very classic, very streamlined, very flattering! I envision you wearing this ensemble to some grand event at Danny's college some years hence.

I, too, wear browns when my hair color is more the color of tea than coffee. Vintage scarves brighten the look for casual wear. Chunky gold jewelry and a hat with a brim completes the outfit when I must make an appearance at friends' parents' funerals. (Black seems overdone, while florals are too cheerful.)

Apparently it's good luck to be shat on by a bird...

In the photos on my Chromebook your outfit looks grey, so I was struggling to see the brown but what beautiful garments they are and you look good in them. I love brown but I think it's more difficult to pair other colours with - though brown and teal sound good.

I love the earrings, brooch and watch. I had a watch from Lidl which cost me 2.99 years ago. It was brown with a gold coloured face and it had a picture of the face of Gutenberg (inventor of the printing press) on it and I loved it. I wore it to death.

Good luck with the bird counting. I drove to Cambridge today to see a friend and saw a kite and kestrel over the dual carriageway.

@Thrifty Parka
Thank you. That's a good idea-I should do a watch post.

@Jessica
True, it could use some colour. That grey-ish brown is tricky though!

@Sue
I was just thinking about you-I bought a dish soap called, "New Zealand Springs" that's scented in some floral/aquatic way. Now when I do the washing-up, it is like we're hanging out together! I wonder, do you guys get American scented dish liquid? Does it smell of smog? Somehow I suspect New Zealand doesn't smell like hyacinths and melon!

@Beth
You know, in recent years I've had to give a thought to appropriate funeral attire as that's the sort of thing that happens as you (and everyone else) get older. I have a navy blue crepe dress that I now think of as my "funeral dress" but it is good in just about every weather. You're right about black-unless it is the immediate family, and even then it seems a bit Victorian. My sister showed-up to our mother's funeral wearing a hot-pink silk dress and pink ballet slippers, which is the other extreme, but you're right about brown being just right.

@Veronica
My dad always said that about bird-poop, but he also thought it was good luck when they flew in the house (As my mother chased them out with a broom).

That almost sounds poetic...
A Kite and a Kestrel went to Cambridge to see what they could find
"You'll get us lost, the motorway tossed and anyway. you're blind!"
"I'll get us there with an hour spare" said the kestrel unto the kite
And once there, in the city so fair, I'll take you out for a bite."

That shade of brown reminds me of the 40's drabs.
Ok, Missy if you're going to wear 40's drabs I want to see a victory roll & a bright coral lippy, and don't forget some startling white eyeshadow applied lashes to brow!
Geez, Bibi's a bossypants today.
I have a Himalayan crow friend who follows me, shats upon me, & actually has pulled my hair while I hang laundry of the roof. He has a harem of crow girlfriends so I'm not sure what his fascination with me is.

@Bibi
Noooo...no victory rolls. Not a good look on me.

Yikes-I could not handle being dive-bombed by a bird. No. No. No. You're braver than I.

That watch is fab, you'll hear no criticism from me.

@Mim
That's a good observation about texture. As soon as you said it I was nodding my head in agreement. Perhaps that's the trick-combining textures. Thank you for the inspiration.