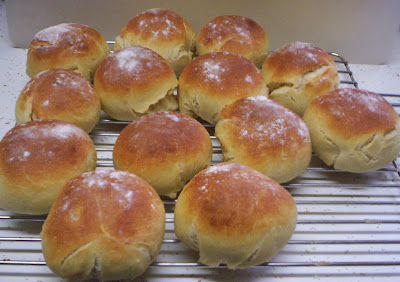 I didn't name these rolls, and by today's "artisan" bread standards I don't know if they would really be considered 'crusty", but they are less squishy than bread generally was in 1972 when the book was published.

The recipe calls for two egg whites. I went ahead and used them though honestly, I don't see the point. It left me with two egg yolks which was happy news for Danny as my chocolate pudding recipe uses exactly two egg yolks.

I suppose the real test will be how they hold up overnight. Still slightly warm they are perfectly acceptable dinner rolls. Not spectacular, but decent. I'm more interested in how well they support a cheese sandwich for lunch tomorrow. I'll keep you posted.

From The Better Homes And Gardens Homemade Bread Book

Ina large bowl, combine shortening, sugar, salt and boiling water. Stir to dissolve shortening and let cool to room temperature. Add the yeast to the bowl along with egg whites and 1 cup of flour. Mix well. Add remaining flour gradually until you have a soft, workable dough. Knead until smooth-about ten minutes.

Place in a buttered bowl and let rise until doubled-about 1 hour.

Remove from bowl, punch down and let rest, covered for ten minutes.

Shape into 15-18 rolls (I got 15) and place on a greased baking sheet. Dust tops lightly with flour and cover. Let rise until doubled-another 40 minutes or so.

Meanwhile, preheat the oven to 450 degrees F. If you use a pan to create steam, set it in as well.

Create steam. load the bread and bake rolls 10-15 minutes or until golden and hollow sounding. Cool on racks.
Posted by Goody at 10:01 AM
Labels: Bread, Real Super Classy Stuff Circa 1970, Rolls

Update-the rolls held up well, but lost the crispy crust. I still think they were kind of on the heavy side for a roll, but Mr. Eat The Blog really liked them.