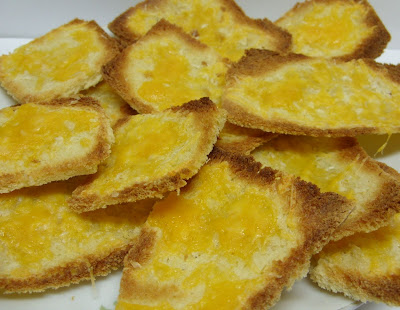 These are so easy to make, and wonderful with a big bowl of vegetable soup. This makes a nice activity for children, flattening out slices of stale bread with a rolling pin. OK, it makes a nice activity for my child, yours might require a bit more imaginative playtime. Sort of like when my mother wanted me out of her hair she'd send me to the drugstore with a note to buy her cigarettes. Kept me occupied, saved her a three block walk, and she got fifteen minutes of quiet. I don't smoke, so we made melba toast.

Speaking of my mother-she adored melba toast, from a box. At some point, I think she got the idea that they were, if not actually good for you, a less harmful indulgence than other carbohydrates. She was diabetic and had a heart condition (multiple heart attacks and surgeries-think Dick Cheney territory) so it wasn't outrageous that she kept an eye on what she was eating, but it took some pretty damned determined chewing to eat the rounds that came out of those boxes. They sure were hard! I wonder if those things are still buried in landfills refusing to decompose. I'll bet they'd make a great garden mulch.

My mother ate the same breakfast each morning for the last fifteen years of her life, which I know because I made her breakfast. I know what you're thinking:
"How hard is it to put melba toast on a plate?"

And you'd be absolutely correct if we were talking about anyone other than my mum who had very specific ideas about things like coffee and melba toast. Again, if I'd survived seven heart attacks, I might feel like each breakfast might well be the last and really, wouldn't you like it to at least be prepared the way you want it? Again, I hear you thinking:
"Well why didn't she prepare her own breakfast?"

And you'd once again be absolutely correct, if we were talking about anyone other than my mum. I mean really, why have children if you can't get them to do stuff for you? Do you have any idea how many times they would have had to get in the car, and go pick up dinner had my sister not been born to make runs to Kentucky Fried Chicken? That first sixteen years must have seemed so incredibly long, waiting for her to get a driver's license. Really, must have been hell.

The melba toast in a box came in some god awful flavours. The garlic were pretty bad (kind of like licking the inside of a cannister of garlic powder-only worse), but the rye were inedible. That didn't stop my mother from eating them. Breakfast consisted of five melba toast rounds (because that was what the box said a serving size was, and my mother was a real, "follow the directions" sort of person) with sugarless jam spread on them (even on the garlic. Yes, I know-believe me, I know). Her coffee was Folger's instant, with four (!) Sweet-n-Low saccharine packets. The cup (she prefered very large, Styrofoam cups that were probably never intended for hot liquids) would be filled half way, then topped off with Non-Dairy creamer that she bought in a frozen carton. Sounds easy enough, right?

The melba toast was never:
-Spread neatly enough (she didn't like the jam all the way to the edge of the toast because it would get her fingers sticky. My son is the same way, but he's five).

-Arranged neatly on the correct sized plate so that they wouldn't slide off the edge while she balanced the plate on her lap watching home shopping on the bedroom television. It was tough to juggle a remote, a telephone, a big Styrofoam cup of instant coffee, and a plate of poorly arranged melba toasts. But by god, she did it, and when she died we had a room full of cubic zirconia to show for it. She would have really loved the internet, but then she would have had a laptop to juggle as well.

All of this is a very long way of saying, these melba toasts do not resemble the stuff from a box, which are vile. I'm not a food snob, and heaven knows I can enjoy a box of Kraft macaroni and cheese once or twice a year, but not store-bought melba toast. My teeth couldn't take it.

I used bread that was already getting a bit stale. Slice it as thin as you can, but don't worry too much as you will flatten it later with a rolling pin. I topped mine with cheese, but you can certainly leave them plain, or go with butter. You might want to skip the garlic powder, unless you're channeling my mother, in which case, you're probably busy watching television and ordering a lovely piopo wood tea cart, or some other horror. In that case, just get your daughter to make some.

Slice the bread and let sit out to stale a few hours. Trim the crusts. Get out a rolling pin and gently flatten the slices until quite thin. Cut each slice in half.

Place slices on a baking sheet and bake at 325 degrees F. for ten minutes. Turn off the oven, turn over the slices on the pan and let sit another twenty minutes. Remove to a rack to cool.

Brush each slice lightly with clarified butter. Top with cheese (I used Parmesan and cheddar) and drizzle on a bit more butter. Place under the broiler until cheese bubbles and the toasts turn brown at the edges. Remove to a rack to crisp as they cool.

You're on your own with the instant coffee.


Is it any wonder I don't make melba toast too often? All that pressure!
Posted by Goody at 2:19 PM
Labels: Family, Family Memories, I Recession Proofed My Family With Stale Bread, Mother, You're Not Going To Throw That Away Are You