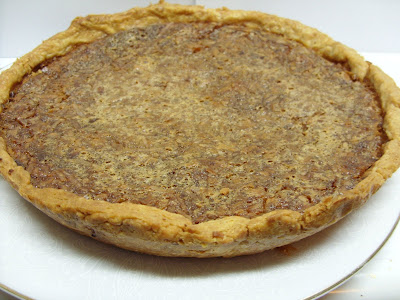 This was an experiment that turned out well. I adapted an old recipe for pecan pie by adding toasted coconut and using my homemade brown sugar which is a bit heavier on the molasses than store bought. I don't know if I would use Golden Syrup again as it is somewhat expensive and I think dark corn syrup would be just fine (I didn't have any, or I'd have used it). The crust is a cream cheese crust which is very light. It makes a nice contrast to the gooey filling. 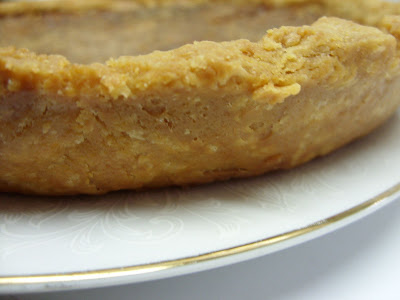 I've heard that broken pretzels can work as a replacement for nuts in many recipes, and I even came across a recipe that suggested using 3/4 cup of Old Fashioned oats in place of the pecans. I like both ideas, and will probably give them a try at some point in the future. 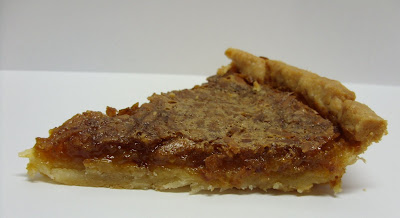 I could have left the filling plain and gone for a sort of tarte sucre, but I already have a killer recipe for that and really, you can't improve perfection, now can you?

Both the crust and filling came from The Best of Food and Wine 1988 Collection, but I will post the recipes as I re-worked them. There are a million (probably a billion) recipes around for true pecan pie, so I won't bother with the original ingredients as published.

Combine flour and salt in a large bowl. Cut int cream cheese. Cut in butter until you have a fine meal. Gently knead until mixed and gather into a ball. Flatten into a disk and wrap in cling film. Chill at least 1 hour, but several is better.

Roll out dough and fit into a pie plate (I used a 9 inch, but an 8 would be fine, just higher on the sides). Cover with cling film and chill at least 1 hour. 15 minutes before baking (while the oven preheats) transfer crust to freezer to firm more.

Preheat oven to 425 degrees F. Line pie crust with foil and fill with beans or weights. Bake 15-20 minutes or until it is almost dry. Remove foil, prick all over and bake another 5-10 minutes or until crust is golden brown. Remove to a rack to cool while you make the filling.

Place coconut in bottom of pie crust. In a saucepan, over low heat mix together the egg yolks, syrup, sugar, butter, cream and salt. Mix well and stir until wooden spoon is coated on the back or it reaches a temperature of 160 degrees F. (Be really careful not to scramble the eggs).

Strain (to catch any eggy bits) and pour over coconut into pie shell. Bake 20-25 minutes (mine took closer to 35, but ovens vary) until puffed. The filling will still move a bit, but will set when cooled.