Hey, didn't your mother teach you to ask first? I was saving that for something! 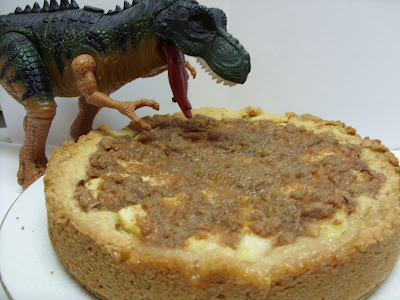 OK, you don't really need to include the dinosaur, I won't insist. This is however a great time to remind local readers that you can go check out the dinosaurs at UNL for free on Thursday nights through the month of March. 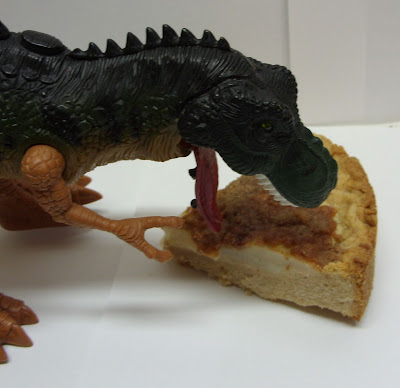 "This is so much better than eating smaller dinosaurs. Even a die hard carnivore gets a hankering for pear cake. Chewin' on a stegosaurus' head is fun and all, but hey, I've got a sweet tooth. Eh, fuck off, I don't need to defend my eating habits."


So, this cake. Originally it called for nectarines, but I live in Nebraska, and it is March. I did however have a couple beautiful, perfectly ripe pears sitting on the counter. It was a good call. The cake itself is lovely, though until it finally cools and makes it to a plate, there's a sense that it is all about to go horribly wrong. The "batter" was more of a dough that gets pressed into a springform, and the topping wasn't exactly a "crumble" when I put it on. Still, the end result is what counts, and both humans and dinosaurs were pleased-but not at the same time, because humans and dinosaurs never lived together. I really never imagined in 2010 I'd need to be pointing that out. Ahem...OK so here's the cake. I still think Yockelson's techniques are overly fussy for what they are, but for a less comfortable beginning baker maybe the details help. Either way, the directions for this particular cake aren't too horribly complicated. 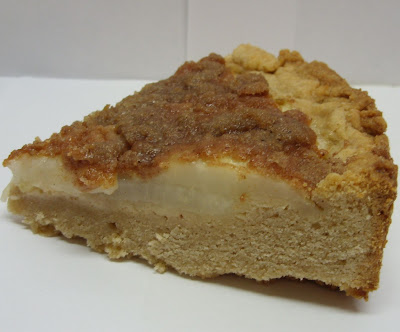 From Country Cakes, A Homestyle Treasury by, Lisa Yockelson


Preheat oven to 400 degrees F. with the rack in the lower third position. Butter and flour a 9 inch springform pan and set aside.

Blend together the flour, sugar, baking powder, salt and spices. Cut in the cold butter until fine pea-sized bits. Further work with fingertips until fine flakes. Beat egg into cream.vanilla mixture and add to dry ingredients. Spread (more like, "press") the batter into the springform leaving a ridge 1/4 inch of the way up the sides. Leave a shallow indentation in the centre. Arrange the fruit in the centre just touching the edge. Prepare the topping by blending the butter into the dry ingredients until crumbled and pour over the fruit.

Bake about 30 minutes (Mine took 45, but I also baked it on a sheet to catch drips-which it did) or until golden and cake begins to pull away from the sides. Let cool in rack for 10 minutes. Then, remove ring and cool completely.