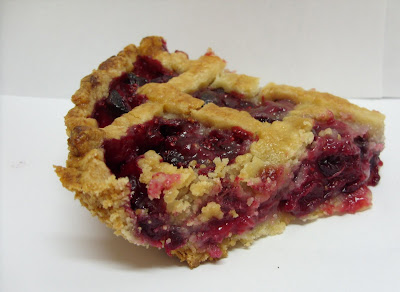 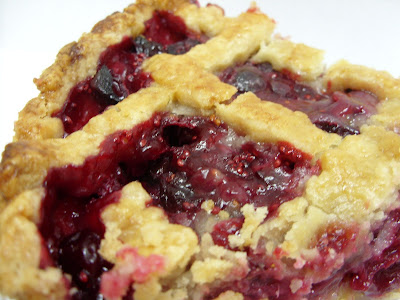 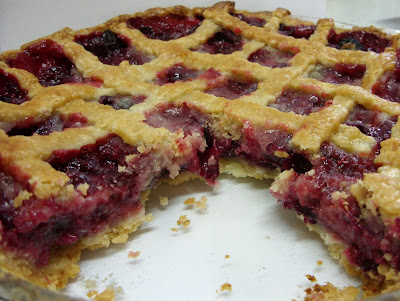 I figured it was time to use some of my cranberry stash. I had a few strawberries left from making jam yesterday, so I tossed those in as well. The raisins well...I don't know, everyone seems to expect raisins in their fruit pies around here. Really, apple, peach, cherry-everyone wants raisins in it. Since I won't be eating it, I decided to just let people have the pie they want, rather than the pie I think they should have. I view this more as a sign of defeat than maturity. They're crazy for mincemeat as well-what can I do?

I adapted a couple of old recipes from Food and Wine back in 1992 (which doesn't seem all that long ago, really). I'll warn you, the crust was very difficult to work with, even well chilled. I think I prefer my own pastry recipe, but I'll post the one I used in case you're feeling adventuresome. I did swap out vegetable shortening for the lard, but i don't think that would have changed the texture at the rolling stage much. It really is a delicate dough to work with, so be warned.

For the pie filling I used more raisins, omitted the nuts, and increased the flour. I also added strawberries. It came up lovely. If you like a runnier pie, decrease the flour (the recipe called for 1/4 cup and I used 1/2).

It took a very long time to bake, and I had to cover the top lightly with foil for the last twenty minutes, but otherwise it was a simple enough pie to make.

Combine flour, sugar and salt in a bowl. Cut in the butter and shortening until fine. Add water a tablespoon at a time and quickly gather together in a ball. Do not overwork. Divide in 2 parts. Roll each into a disk and wrap in cling film. Chill at least one hour until cold.

oh my, that looks delicious. I am going to have to stop reading your blog or else i am going to get fat, fat.

The calories don't count when you're visiting someone's blog ;)

I'd love a slice of that right now for breakfast! I can feel the sugar flowing comfortingly thru my blood..

[verification word for this comment is "unedski." Sounds like a Polish or Russian insult to someone uneducated.]

They demolished the whole pie over two days-I never got to try it. Both seemed to agree the crust was excellent, so perhaps the fussiness of the recipe paid off. I always know if a recipe is a winner by how fast it disappears.