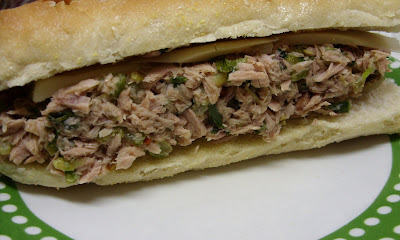 Years ago, there was a small bakery in East Boston that had a deli-counter in front. They sold a few meat and cheese items, and made takeaway sandwiches. I don't know who discovered the place first (Mr. ETB thinks it was he) but once we started bringing home containers of the green olive salad, it was pretty clear that we wouldn't be making our own again.

One day, on the way home from work, I stopped for a vegetable sub. The woman behind the counter was concerned that I wasn't really getting a meal, so she suggested letting her make me a tuna sub.I have a habit of not arguing with Italian grandmothers (because it is futile-really, you won't win, so you might as well sit down and eat whatever is being forced on you-it'll probably be really good anyway). What I got was a fresh baked roll, smoked Provolone cheese, a whole tin of Albacore tuna packed in oil (dumped directly onto the roll, oil and all) and some of that magical olive salad, chopped up. It was the best sandwich I've ever eaten. I immediately clued Mr. ETB in on the tuna sub and pretty soon he too was eating an entire tin of tuna (oil and all) dumped on a roll with cheese and olives. If it had been a little closer to our end of town, I think we'd have made it a daily stop.

After we moved, I guess tuna just didn't seem worth the bother. I mean, without the olives, and the good cheese and someone to wrap it and hand it to you...well, it just wasn't the same. Ten years passed, and I forgot about it-until Danny asked to try a tuna sandwich. I should mention that Danny has recently become a great fan of fish, so once a week (on Monday) he gets fish for lunch. Last week, I introduced him to the joy that is sardines on toast. Thankfully, he really enjoyed it because now I have a really quick lunch that costs almost nothing. Hooray for sardines on toast!

Because of the mercury issue, Albacore is out of the question, and where I live, tuna packed in olive oil is non-existent. I improvised by adding my own olive oil, chopped olives and herbs. This is in no-way even close to the sandwiches we were getting in Eastie, but for a five year old, it was a pretty good introduction to a fish that has been so mistreated with mayonnaise, pickle relish and all manner of ungodly additions. I remember my mother returning home from some society luncheon in the 70's blathering on about the addition of cut-up green grapes in a tuna salad stuffed tomato. That was around the same time people started adding tarragon vinegar, and avocado to every salad.

What I did here is very, very simple. I only cooked the celery and onions because children don't always chew as well as they ought to. Grown-ups could probably skip that part, though it does give the tarragon a chance to combine with the olive oil.