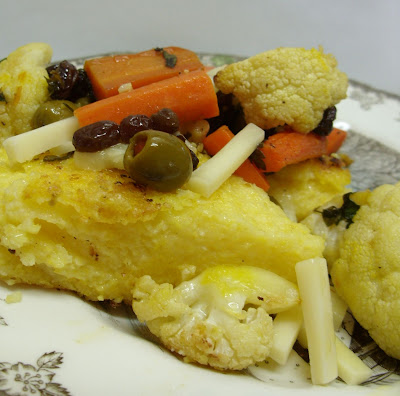 I always know I've prepared something spectacular when Mr. Eat The Blog mentions it. I don't want it to sound like he takes the cooking around here for granted, but he isn't one to lavish praise on a meal. This dish received a good deal of praise.

Sign me up for the Yotam Ottolenghi fan club. Really, everything I've made from one of his recipes has been astoundingly delicious. I've probably tried a dozen or so of his vegetarian dishes that have run in the Guardian, and they have all been successful-even with the changes in vegetables, oils, etc. I find the dishes to be wonderfully adaptable. I've cooked cauliflower with raisins before (and anchovies) but never with olives and saffron. Knowing this combination works opens up all sorts of other possibilities. This is a million miles away from my mother's boiled cauliflower with (if we were lucky) a pat of margarine.

I used the cheap jar of olives I had in the door of my fridge, added carrots, and served it all over fried hunks of polenta-it was still one of the better meals I've brought to the table. In fact, I made this early this morning knowing I'd be home late, and simply fried the already cooked polenta in a pan while the cauliflower dish re-heated in the microwave. No problems, no trace of "cabbage-y" taste or smell from the cauliflower. After a 100 mile round trip with a sick kid to the doctor today (and subsequent hours of sitting in a too-warm waiting room) I was glad I'd thought to cook this ahead of time.

The hours in the waiting room weren't a complete loss though-they have a large, flat screen television loudly blasting the Disney Channel to a waiting room of newborns and small children. I always like to joke that Danny didn't see television until he was three years old-except at the doctor's office. Anyway, I did get clued-in to what I sense is an important bit of pop-culture. I now know what a "Jonas Brother" is. Apparently, there's like three of them. Brothers. They sing or act or something. Tween girls seem to really like them. When I was a tween I had a thing for the dork at the used record store in Evanston, but he was nice, and always let me know when there were interesting Miles Davis records coming in. He wore knit vests.I was sure we'd be married. I might have wrote his name all over my notebooks or something like that, because what the hell-I was sure I was going to marry him. I hope he found a nice girl to micro-manage his life the way I micro manage Mr. Eat The Blog. The Jonas brothers have nice hair, but I don't think they could pull off the knit vest thing. Anyway, if it ever comes up in conversation (you never know) I'm current on my heart throbs.
Posted by Goody at 5:01 PM
Labels: Cauliflower, England Your England, Meatless, Olive Oil, Olives, vegetables, vegetarian, Yotam Ottolenghi Fan Club