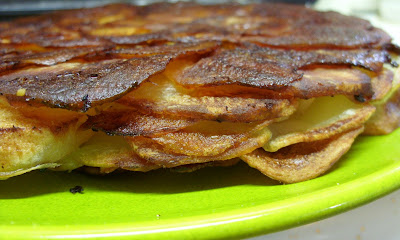 This is the first time my Potatoes Anna dislodged easily from the pan and were neither burned nor under baked. Hooray for me! Who's pointing thumbs at herself? Me, that's who. I'm strutting around like a rooster too.

Honestly, I think the only thing responsible for this miracle was using an ungodly amount of butter in a really well-seasoned cast iron pan. Well, that and dumb luck-which is mostly what happens in my kitchen.

Here's what you do (hardly a proper recipe, but eh-whatever)

Preheat the oven to 450 degrees F. Using about 2 tablespoons, generously coat the pan with butter. Arrange slices of potato in over-lapping circles (start from the centre) taking care not to leave gaps. Brush each layer with more butter, salt and pepper and then proceed with the next. I got four layers, depending on the size of your pan, you may only get three. that's OK.

Put the pan on the burner over medium heat and cook for about four minutes (you'll hear it sizzling). This will brown the bottom. Place in the oven and bake about an hour or until the potatoes feel soft. Remove from oven (carefully) and let stand fifteen minutes. I recommend leaving an oven-mitt on the handle so you don't forget and go reaching for it.

Loosen edges and bottom with a spatula. Send up a prayer to the kitchen gods and unmould it onto a flat plate (so it doesn't sink in the centre). Slice and serve. Strut around like a rooster and point thumbs at self. You just made potatoes Anna.
Posted by Goody at 5:42 PM
Labels: Too Much Butter, White Potatoes, Why Not Just Spread The Butter Directly On Your Thighs