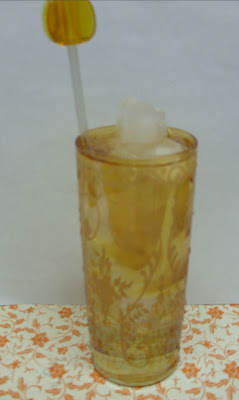 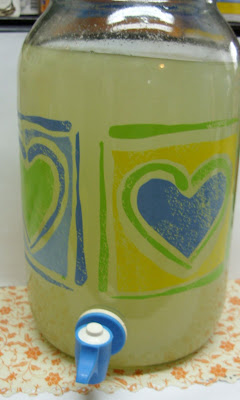 Since bags of organic Meyer lemons were cheaper than two conventional ones this week, I bought a couple bags to experiment with. Danny wanted to try lemonade (he's previously been pretty insistent that he doesn't like citrus)and I thought these might be a gentler introduction to tart flavoured things.

The recipe is adapted from the one in Amish and Mennonite Kitchens. It calls for a whole lot of sugar. I mean, really, much too much sugar. Adjust accordingly to your tastes, but really, three cups is overkill. I used two and it was still quite sweet. Make sure you have a large bowl for mashing, and a large pitcher (or two) to hold over 4 quarts of lemonade.

Slice and seed lemons. Place in a bowl and cover with sugar. With a potato masher, crush until lemons release their juices. Add hot water and stir until sugar is dissolved. Add cold water. With your hands, squeeze each lemon slice to extract pulp and extra juice. Discard peels and pith.

Serve chilled in a pretty glass. I posed that glass with water and ice cubes rather than lemonade because I didn't feel like drinking lemonade and I knew I'd end up spilling it if I re-opened the large pitcher. Still, I like to show off my collection of pretty glasses and swizzle sticks so...use your imagination and pretend it is a glass of lemonade. The stuff in the large pitcher is lemonade. I swear to god, it isn't pee. Really. But the glass? Yeah, tap water. Aren't you glad you read this all the way to the bitter end? The people who come here to just look at the pictures, well, they miss out, don't they? Indeed they do.
Posted by Goody at 1:56 PM
Labels: Lemon