Does Anyone Try A Recipe... 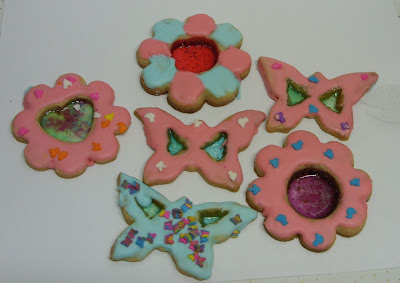 ...before posting it anymore?

Twice in one week. This is actually kind of pissing me off. This time, it was from Martha Stewart. I mean, you'd kind of expect better, or I would have anyway.

The cookies were inedible. You'd think anything with half a pound of butter would at least taste good, but no-these were ass. I'm sorry, they were. The cookie is so freaking tough it isn't worth risking dental work on (not the candy part-the cookie itself).

It isn't like I have all this extra energy to stand around rolling out dough and coating them in royal icing. I think for the near future, I'll stick to trusting my gut feeling with baking. If it sounds wrong, there's probably a good reason for it.

Have I sent you my Grandmother's sugar cookie recipe? It's the best roll/cut/ice if you want recipe I've ever come across, and it's super simple.

T would love to try it.

I have to say, there was no excuse for this recipe they published. I used a non-stick rolling surface too-it wasn't like I added any flour to toughen them.

I'm sure your Grandmother's cookies will be miles better (and tested over years) than this was.

I was looking for a recipe for homemade lasagna noodles. It was my first attempt. Like you, I thought I could trust the Martha website to post good recipes. The lasagna recipe called for 16-18 egg yolks.... could that be right?I was thankful I found your recipe instead. My first attempt was a success. Really glad you posted it!

Yeah, that's a lot of egg yolks. I know that many of the people writing for the magazine are writers, not cooks, but still-they ought to test them before publishing.

I'm glad my recipe worked for you. I adapted it from an old Farm Journal recipe and exchanged semolina for all AP flour, An extra egg (or two) or less probably wouldn't be earth shattering, and I could see trying other flours, but 16 eggs is...I don't know, That's really strange.