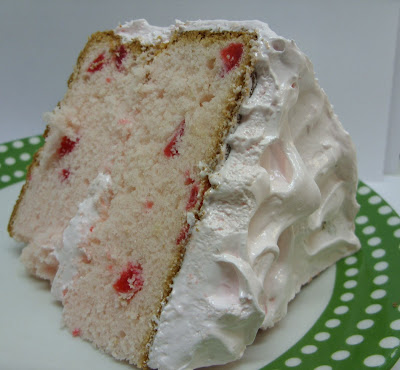 The frosting is much pinker than the photo has it look. 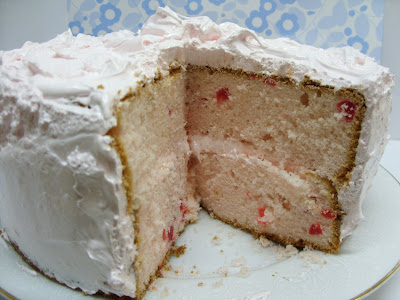 I know, the cakes keep getting more and more retro.

I had some aging cherries sitting in the door of the fridge. Other than a Manhattan, I don't really have much use for them so I baked a cake-but not just any old cake-a Betty Crocker Picture Cookbook cake from the 1950's. I have standards, you know.

The frosting was really interesting. Normally, I favour buttercream because I've mastered it and pretty much know what to expect. I admit, beating hot sugar syrup into beaten egg whites sounded a bit scary, but it went well. It was only as I was beating the frosting that I realised why the smell was so familiar-it smelled like The Lynnway. OK, I guess that needs explanation for people not from Massachusetts.

I used to commute home to Boston by way of Lynn, Massachusetts ("Lynn, Lynn city of sin, never come out the way you went in")*. The marshmallow fluff factory was located nearby and as I sat in traffic, I would sit there daydreaming about how fantastic my life was sitting there with all the sensory delight of marshmallow Fluff and the marine smell of low tide. Anyway, no sooner I began making the frosting than I realised it was going to be like a fancy Fluff.

Cream together the butter, shortening and sugar. Preheat the oven to 350 degrees F.
Sift dry ingredients together, and combine milk and cherry juice. Add alternately in three additions to the creamed mixture. Fold in the cherries. Fold in the egg whites. Transfer to pans and bake 30-35 minutes or until they test done. Cool 15 minutes in pan, then cool completely on racks.

In a small saucepan, heat the sugar, juice and cream of tartar with the lid on over medium heat for three minutes. Remove lid, and cook until it reaches 242 degrees F.

Beat the syrup very slowly into the egg whites beating constantly. Add vanilla extract and keep beating until fluffy and makes a spreading consistency. Frost cake generously (because heaven knows, there is a whole lot of this stuff to use up).

*Because that rhyme is so well known, a few years back some local politicians thought changing the name of the city to "Ocean City" would get children to stop chanting it. The public wasn't too excited at the thought of changing the name of the city, so Lynn it remains.
Posted by Goody at 5:21 PM
Labels: Betty Crocker, Cakes, Cherries, Maraschino Cherries, Vintage Recipes

OMG, there could be an entire blog devoted just to Lynn. Did you ever go to the thrift store operated by the crazy broad? Michael took me there just to experience her. I think she liked me cuz she poked me in the belly with a comment something like I need to come back and buy more. Michael tells stories about her so well.

Yep, I know the place you're talking about.

Michael really should blog all his stories, I mean my god, talk about truth stranger than fiction-he was such a magnet for lunatics.

This post was very intriguing especially with the banter about Micheal (?) between you & Raymond. Love reflections!

I can't imagine a city trying to change it's name just because kids chant.

Lynn, Mass. is a really strange place-I don't think I could do a blog post really doing it justice.

What I want to know, Regardless of any talk of Massachusetts, is whether it tasted good or very much like cherries at all? I have been looking to make a cherry cake for a long time and I think if I modify this a bit it could be the cake I've always wanted! (For starters, I'm going to make it an INTENSE red color :D )

The cake was nice. White cakes tend to be a bit on the dry side, so it helps to finish it off within a couple days of baking. I did not care for the frosting, but everyone else did. If you like marshmallow fluff, this is similar.

Were I to make this again, I'd use something like grenadine syrup rather than the liquid from the cherries-it might taste less chemical. If you dye it red, I'd go for one of those, "no taste" red dyes they sell in craft stores. Again-all the dye in the cherries and juice can be somewhat bitter. To me, it did not taste like cherries-not fresh ones anyway. It reminded me a bit of cherry cough syrup-another issue with maraschino cherries.